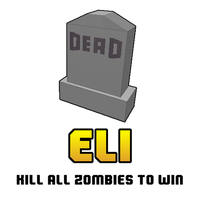 Elimination [ELI] is a gamemode in which a team of survivors must kill 100 zombies (not including AI Zombies). There are mostly a medium amount of zombies, depending on the difficulty and server size. There is no time limit, but normally rounds last 4-6 minutes.

While it was introduced later then Survival and Objective, it later became a main gamemode for many maps such as Boathouse and Holdout.

Retrieved from "https://r2d.fandom.com/wiki/Elimination?oldid=299382"
Community content is available under CC-BY-SA unless otherwise noted.